ParaView 5.10+ can be downloaded from here.

ParaView comes with its own Python, which may be missing some dependencies for the desired usage. We can add more Python packages into ParaView by creating a virtual environment and then activating it inside the application using the import line import paraview.web.venv or by using our local version and importing it.

First, we need to setup the ParaView add-on python environment, in which we will only install trame, but we could add any other Python libraries that are not included in the ParaView bundle.

Conda provide many open-source packages and ParaView is part of their offering. When using the conda approach you won’t need to download ParaView as it will get installed by conda for you. That way you can create a virtual-environment that can contain both ParaView and trame by doing the following.

Then later you can simply use python rather than pvpython

At the very top of our scripts, we need to import our helper script so the --venv path/to/venv can be processed.

After that we can import trame and start using it (assuming we run our application with the --venv /path/to/venv/with/trame argument).

The command line below illustrate how a SimpleCone example can be run on a Mac computer where ParaView 5.10 has been installed. 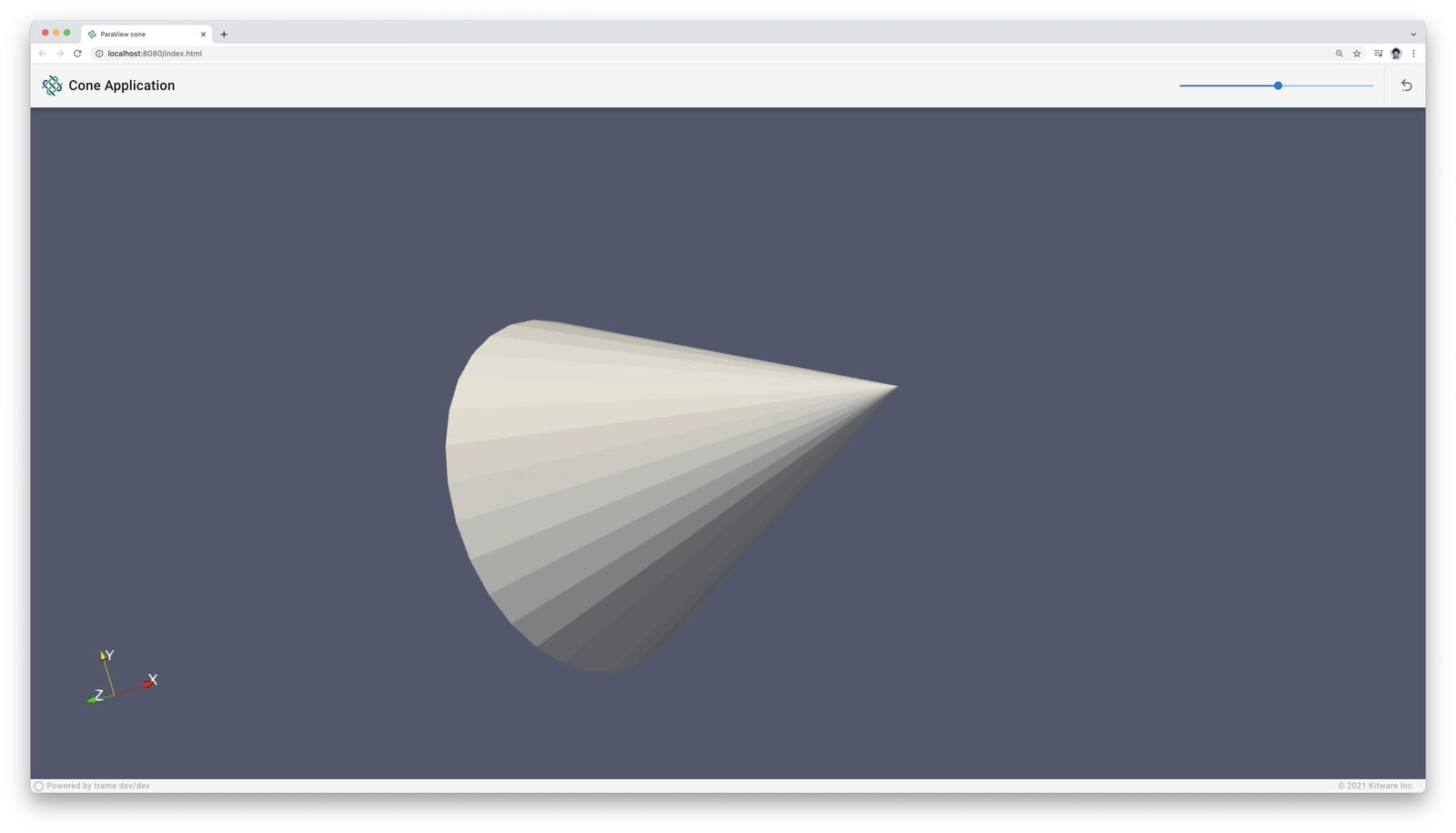 ParaView use proxies which abstracts the VTK object handling so they can be easily distributed to support the processing of very large datasets.

For simplified usage, ParaView provides a simple package that lets us simply create and interact with these proxies. The SimpleCone.py example provides the core concepts needed to understand how to work with ParaView.

With these three lines, we create a full pipeline and a view. Now, we can use trame to show that view in the client.

The rest of the code looks very similar to the VTK Hello trame example, but instead of importing the vtk module of trame

we import the paraview module

Now we can start adding some UI to control some of the parameters that we want to interact with dynamically. Let’s first add a slider to control the resolution of the cone. We need to create a method to react when the resolution is changed by the slider. In ParaView proxies, object parameters are simple properties that can be get or set in a transparent manner. At this point, we simply need to update the cone.Resolution and update the view to see the change.

Now, we can extend the UI with a slider on the layout.toolbar

With these few lines, we have created a 3D cone, which we can adjust the resolution all leveraging ParaView.

To learn more about ParaView scripting, look into ParaView trace which let you convert your UI interaction into actual Python code that can then be reused in your application.

With the basics in place, we can now dive further in by using some built-in features of ParaView, such as saving and loading a state file. State files are a convenient way of capturing all the settings that were used to generate a visualization with Paraview. 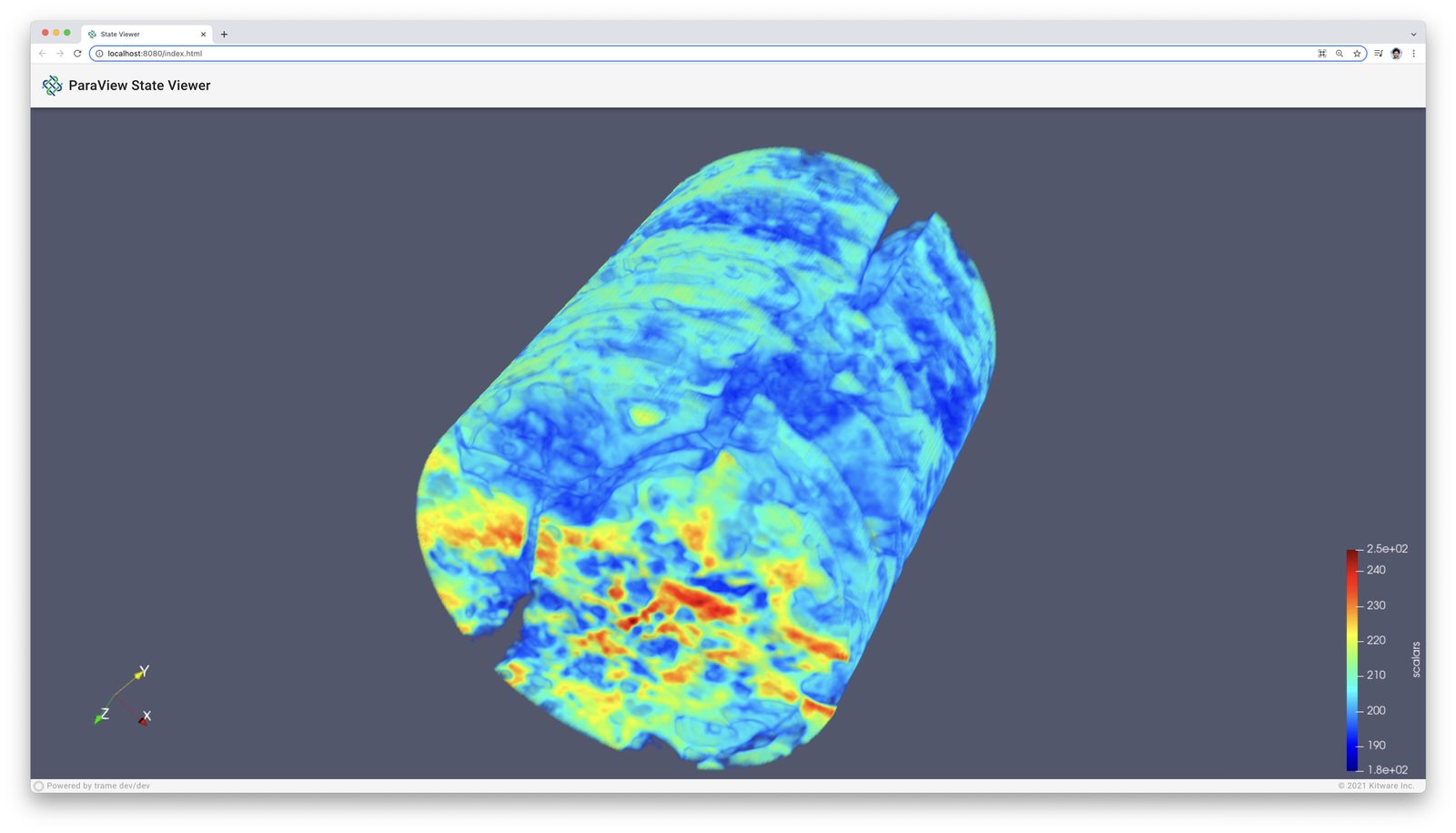 The rest of the script we’ve seen before, but we are missing the details of the load_data function.

The load_data() function requires us to code the follow

The (1) is achieved with the following set of lines. More information on CLI are available here.

To achieve (2) with ParaView the following set of lines are needed. ParaView trace should be able to explain the magic using the UI and looking at the corresponding Python code.

Create and Connect a view element

Then (3) is similarly as before for VTK.

Finally (4) is achieved with the following set of lines, the same way it was achieved with VTK in trame when switching from remote to local rendering.

That’s it. You now have a ParaView trame application that let you reproduce complex visualization in a web context. 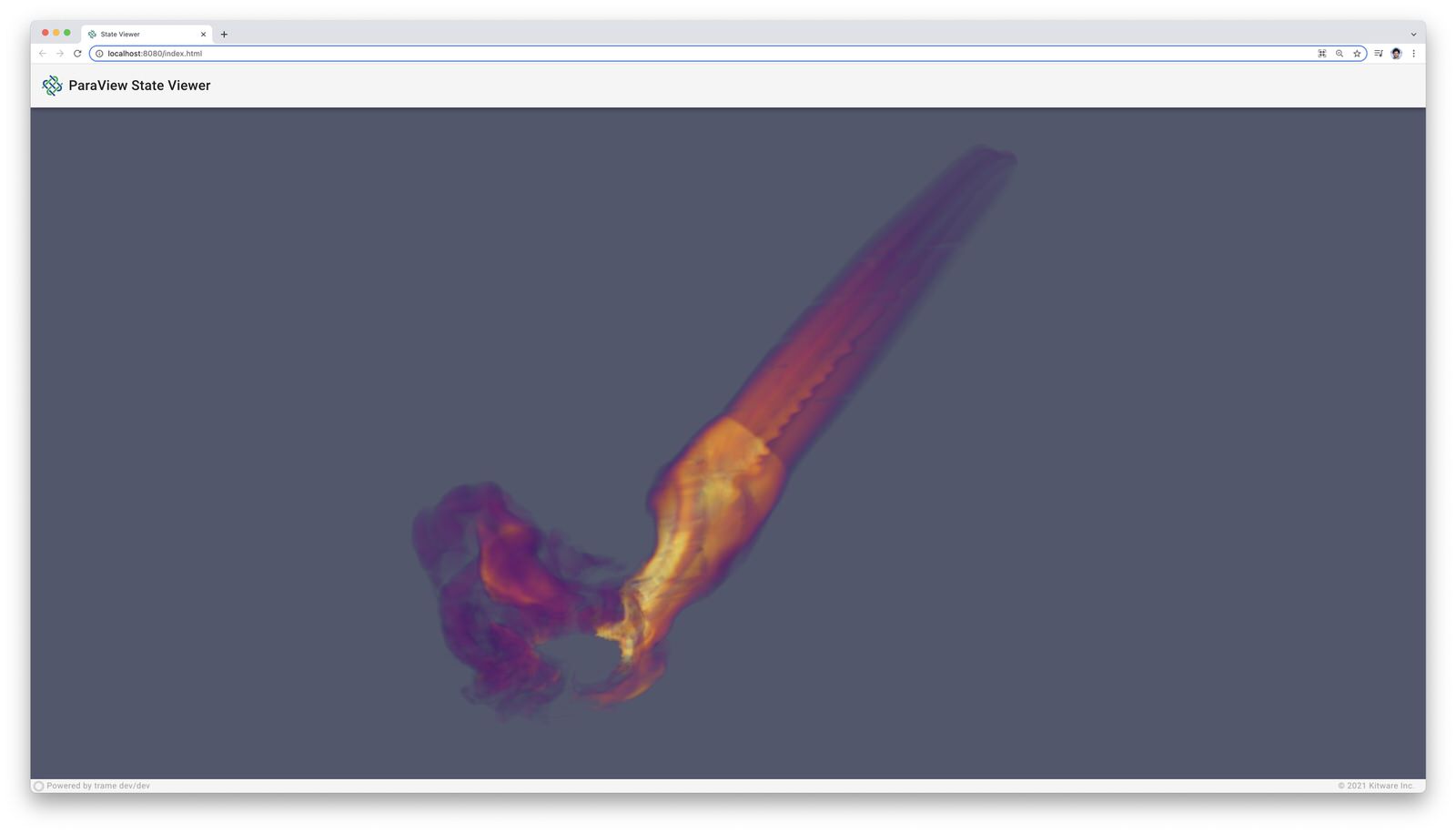 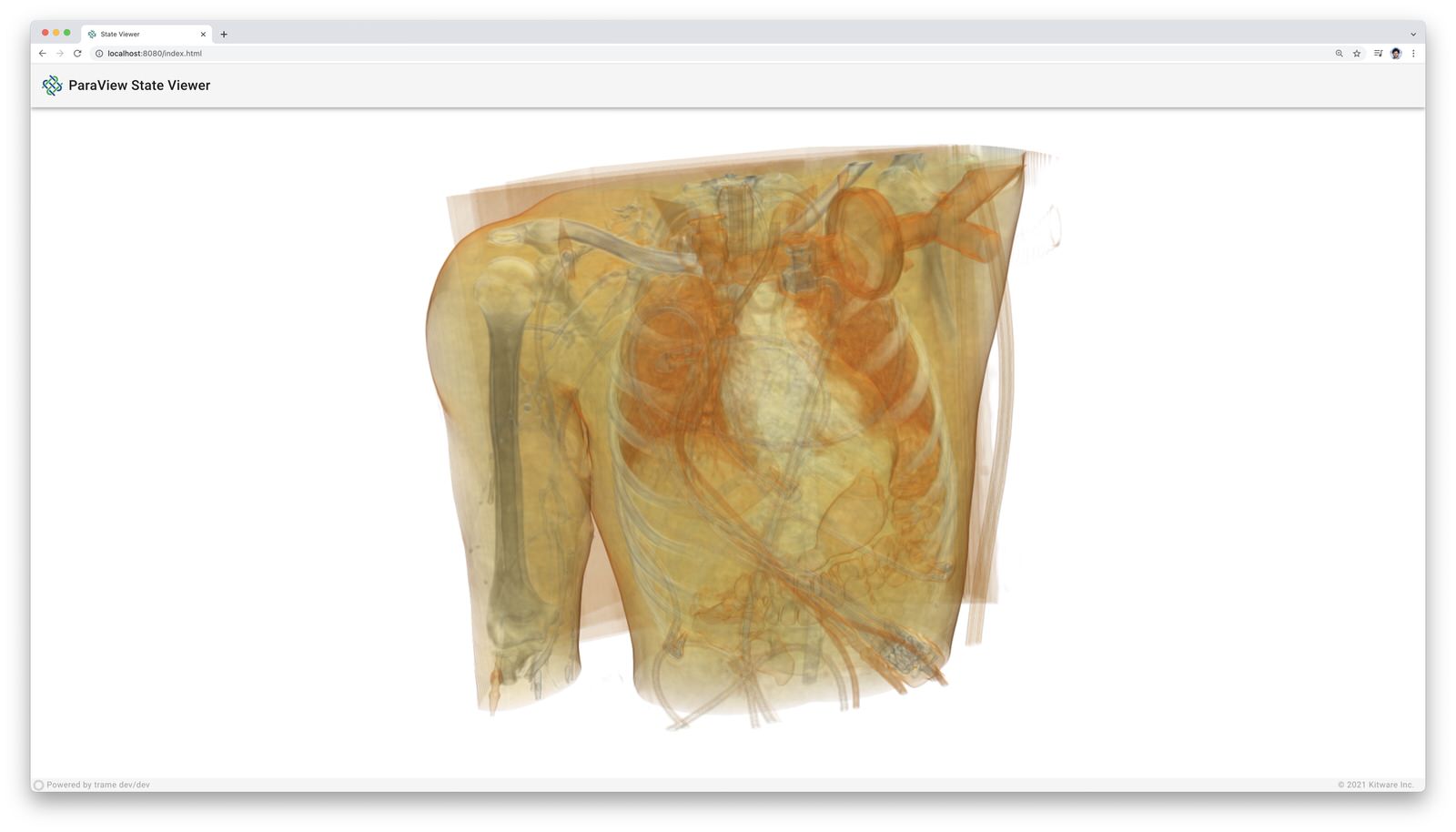 Your browser should open automatically to http://localhost:1234/ 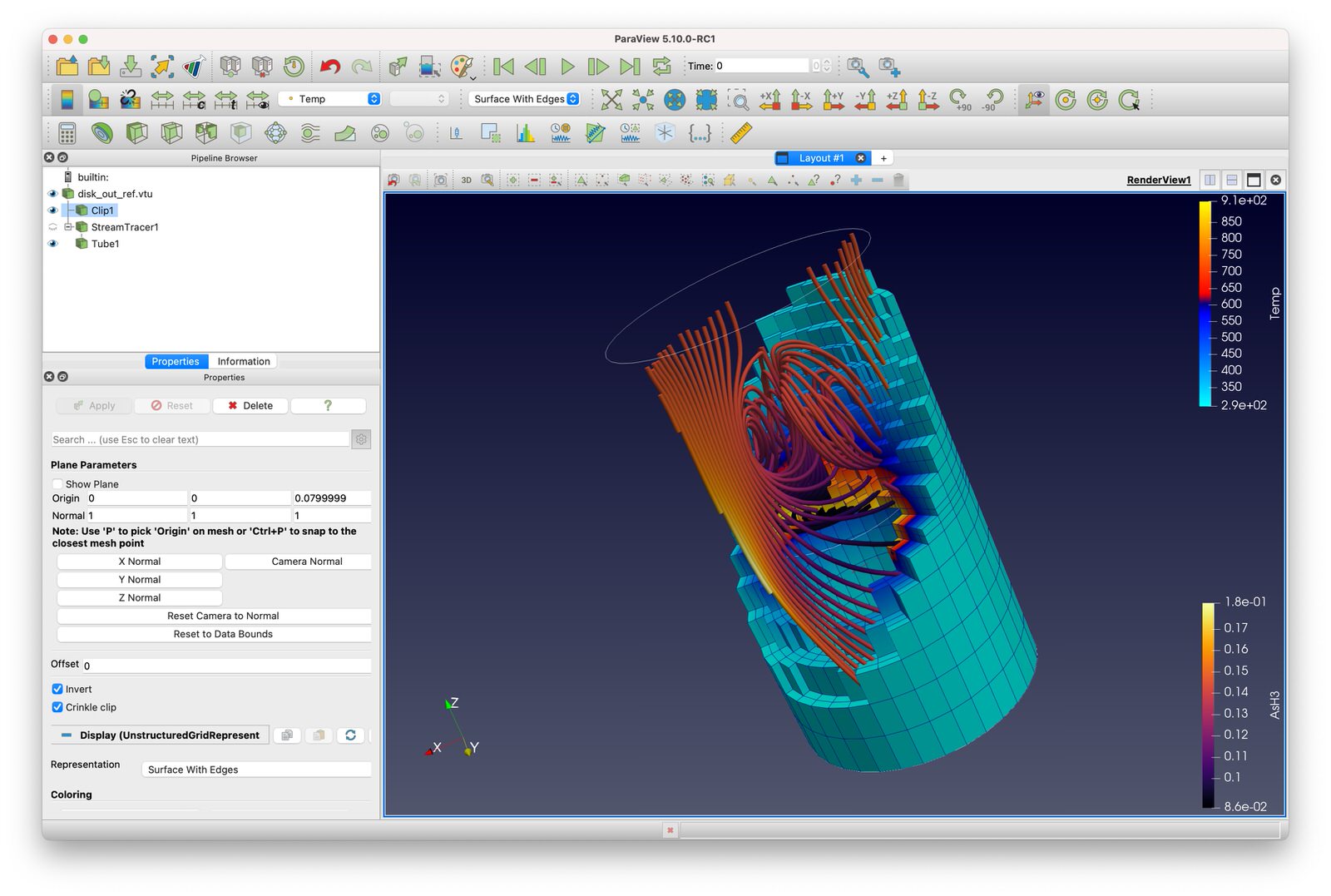 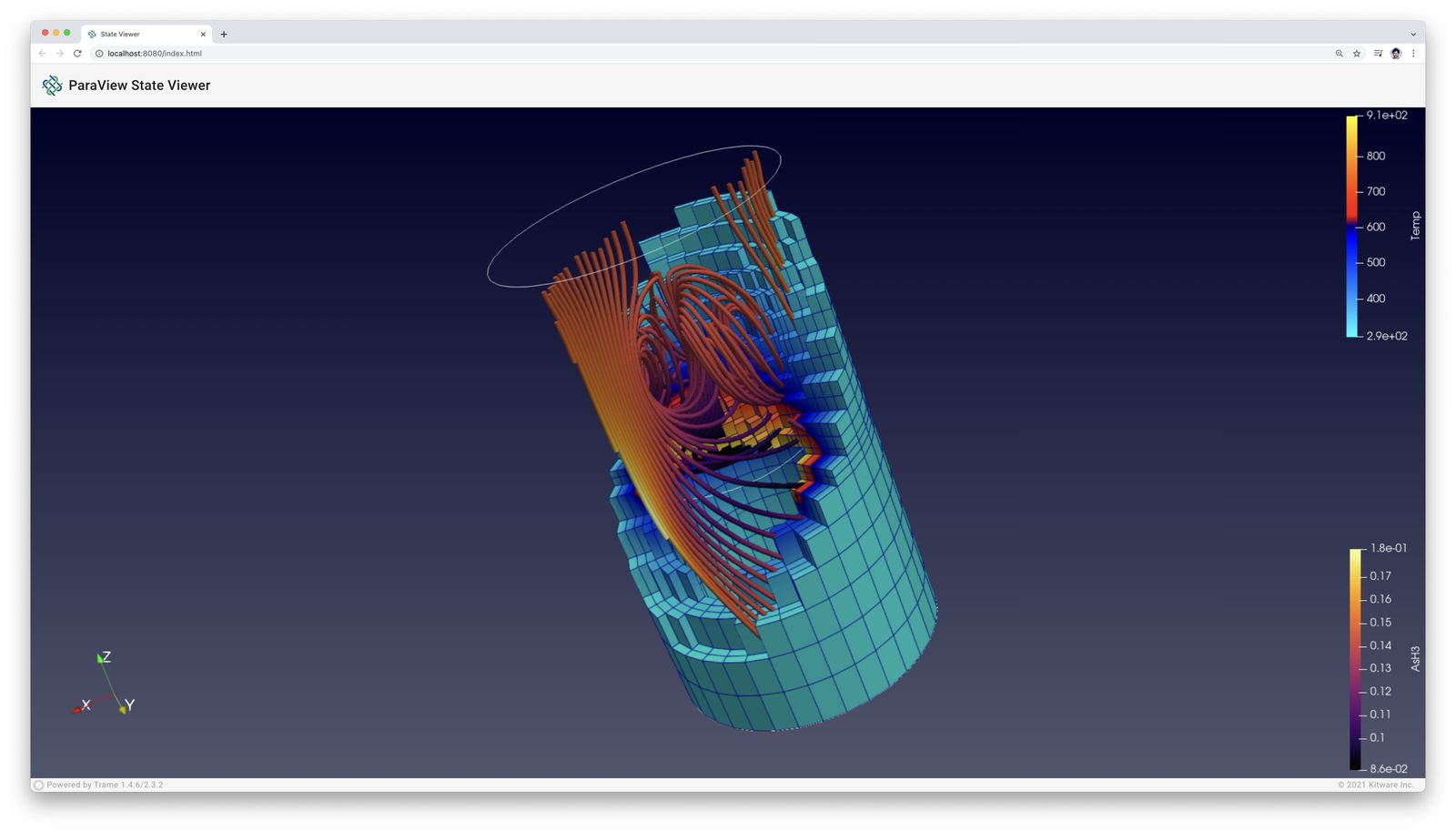